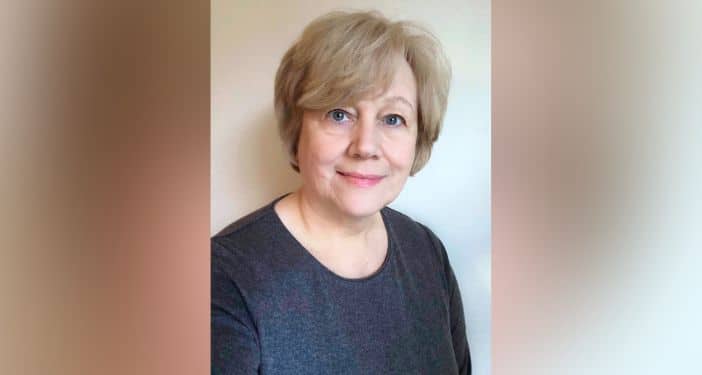 Linda Lewis was born in Pittsburgh, Pennsylvania to a father whom “she admired very much because he was an ethical man.” He was dedicated to their community and volunteered at charity events, spending time not only with his children but with other children who were not so fortunate. Lewis gives her father “a lot of credit for who she became.” Her mother was a homemaker and part-time worker who was very “stern.” From her parents, Lewis learned how to be “hard on herself, but gentle to others.”

Growing up, Lewis was a Lutheran among Catholics in her neighborhood and she “learned to stand alone.” She discovered Martin Luther who “had the courage to take on the establishment during his time.” Lewis loved to read about historical figures and fictional figures who took on difficult opponents. Lewis noted Queen Zenobia who challenged the Roman Empire and lost, but the world remembers what she did as a cultured monarch.

Lewis graduated from the University of Texas with a degree in Geosciences in 1979 and received an Emergency Administration and Planning degree in 1989 from the University of North Texas. Since she was a child, Lewis was fascinated by science, bringing home rocks and plants and wanting to know more about them. Her interests were never encouraged because “girls were not expected to go into science.” Her mother felt the role for girls was to grow up and get married, so Lewis had to pay her own college tuition.

Lewis worked for Argon National Laboratory reporting to their Washington D.C. office dealing primarily with clients from the U.S. Army and Federal Emergency Management Agency (FEMA). Lewis did emergency planning projects for two scenarios; a chemical weapons depot accident and a nuclear power plant accident. Working as a team, Lewis and the government agencies wrote scientific papers, offered advice and prepared questionnaires and standards for evaluators in emergency power plant response and preparedness. Nuclear preparedness is complex, and Lewis feels that her whistleblower story was not covered by reporters because of that complexity.

The Chemical Stockpile Emergency Preparedness Program started soon after Lewis got her job at Argon. It was a demanding program because no one had put together a manual on how to respond to a domestic incident involving chemical weapons. Lewis put together parts of this unique document, with each incident tailored to a particular community. From 1989 until 1992 when Argon had staff cutbacks, Lewis worked at Argon. She quickly got a job at the U.S. Department of Agriculture (USDA).

From 1992 until 2005 Lewis was an Emergency Planning Specialist at USDA. She traveled the country, meeting with state officials in a planning process, evaluating a state’s preparedness, especially regarding food and agriculture. Floods, food, terrorism all fell under the USDA purview. Incidents like mad cow disease, satellites hitting the earth and contaminating the soil, pet food, livestock, contamination with adulterating substances in the food chain, with nuclear war the ultimate disaster. Lewis was highly regarded and proficient at her job, with FEMA officials advising USDA that she was the most capable evaluator at USDA.

In October 1996, Lewis attended a routine emergency exercise in Delaware, testing preparedness for food and agriculture protections in the event of a nuclear power plant emergency. She observed several areas where protocol was not followed. Poor communication was abundant, the National Guard was not called out, roadblocks were not set up. Lewis noted the same problems were experienced at the Fukushima nuclear disaster a few years later, where basic safety requirements such as risk assessment, containment of collateral damage and absence of developed evacuation plans existed.

The emergency exercises developed by Lewis and her team at FEMA and USDA are designed to make sure an American community is prepared if a nuclear accident occurs. The exercise is designed to replicate what should occur if disaster does strike and is realistic as possible. Delaware was woefully unprepared, with multiple issues present and critical information withheld. Lewis had her report checked by supervisory FEMA personnel who agreed with her assessment of unprepared state officials.

At the post-exercise meeting, state officials attacked Lewis personally, shouting and questioning her credentials. They felt that “FEMA owed them a perfect score.” State officials were adamant that they should get a “flawless exercise.” It was pointed out to Lewis that “I, a woman, had no business finding fault with a plan that had been approved by men.” Ultimately, according to Lewis, state officials stated that FEMA had no right to criticize their state’s performance, even though authority to do so is outlined in 44 CFR 351. There were also references to the upcoming Gubernatorial election slated the next month in which the exercise results might be utilized against the sitting Governor.

Without a valid basis, FEMA eventually went along with the state officials, telling Lewis that they were going to change the report and give Delaware a perfect exercise, and Lewis was expected to withdraw her report. Lewis refused, and advised she would not accommodate FEMA because it was a “public safety issue.” Lewis had never been asked previously by USDA or FEMA to change her reports, but heard later that other evaluators had been intimidated into changing reports.

Lewis informed her superior at USDA after she returned from Delaware, but “he did not want to hear it.” The retaliation was swift and brutal. FEMA banned Lewis from conducting any further exercises in Delaware, Maryland, Pennsylvania, Virginia, (RegionIII) including the one state in which Lewis resided. Lewis did not get her annual reviews, which provided pay raises, her supervisor became “very critical” nitpicking her work and making her work environment “very unpleasant.”

Because of the sexist comments aimed at Lewis, she appealed to the Civil Rights office, which did nothing. She filed an Equal Employment Opportunity (EEO) complaint at the end of 1996. In 1997, Lewis wrote to the Senator of Delaware, Joe Biden, and sent the facts of a coverup by Delaware state officials. She got no answer. She followed up by fax and phone, with Senator Biden’s office acknowledging they got her report, but they did nothing. Lewis was subsequently advised by her supervisor that he knew she had contacted Senator Biden, and it resulted in the retaliation getting worse. Her boss made it clear because of the Biden contact she would never work in Delaware or that FEMA region ever. He also noted that senior officials in FEMA and USDA were upset with Lewis, who was the only USDA employee with a comprehensive, formal education in emergency management.

At work, Lewis was getting the worst assignments, she was being demeaned and she did not get an award or raise, even being passed over for in-step raises that normally just occur with time spent on the job. Lewis asked for a detail away from nuclear preparedness, and was granted an assignment in foreign equivalency evaluations, which checked the exporting of meat and poultry from foreign countries. She had no phone to call the countries assigned, she had to borrow an office to conduct business and her supervisor berated her when Lewis tried to do her job.

In 1999, Lewis was moved again to an office that was used to store furniture, her computer was not hooked up to the system, and then she was told to box up her property, was escorted out of USDA and told she was on a week leave. Lewis received no information nor any idea what to expect.

She was called back to work after her leave, and was sent to a room in an office that had been a storage closet. Lewis was not given a mailbox, and was told her security clearance was suspended. She was not provided any work and had an empty desk. Lewis was sent to have a urine test, which she passed, and questioned why her clearance was suspended, was informed she was a “difficult” person.

Lewis had not heard anything back from EEO, so she filed a second complaint, and a complaint to the Office of Special Counsel (OSC). Lewis was ordered by USDA to take a Fitness for Duty (FFD) exam, so she contacted Dr. Donald Soeken who advised her it was typical for the U.S. Government to use FFD exams against whistleblowers. Dr. Soeken evaluated Lewis and found no personality disorders. Other psychologists she consulted also found nothing except stress manifestations.

Dr. Soeken took the psychological reports to the Chief Medical Examiner (CME) at USDA who “did not see a reason to have a FFD exam” and recommended Lewis get her clearance back.

For a second time USDA advised Lewis that she had to take a FFD exam, bypassing the CME. Lewis was presented with a list of FFD providers, who had previously been provided with false allegations against Lewis by USDA. Lewis was placed on paid leave with no end date after she was diagnosed with a nebulous label that has been used against multiple whistleblowers.

A few months later, Lewis got a notice right before Christmas that USDA was planning to terminate her. Lewis retained an attorney who managed to keep USDA from firing her, and she found her original job posting which noted she did not need a security clearance, which removed the USDA reason for firing her. USDA then had to accommodate Lewis for an “alleged” mental disability which she never had in the first place.

Lewis filed a complaint to the Merit Systems Protection Board (MSPB) in Spring of 2003. From 1999 until 2003, Lewis was on paid leave, but it was a stressful, litigious period. The MSPB initially ruled against Lewis, but an appeal was expected to take place. According to Lewis, the law firm representing her missed the appeal deadline and advised her they had no responsibility to file an appeal. The EEO complaint went through different phases, but Lewis never got a hearing. In 2009 Lewis settled her EEO case. Lewis was very disappointed in the lawyers she retained.

The EEO settlement was merely reimbursement of expenses in litigation but no compensation “for years of retaliation, for misery, loss of reputation and career.” After leaving the government, Lewis applied for other jobs but could not find one “which made no sense since I was so qualified.”

Lewis was constructively discharged in October 2005. USDA had placed her in a small office with chemical fumes, and Lewis developed chronic respiratory infections that plague her today. Physically, Lewis knew she could not continue because her respiratory system was collapsing. A physician told her it looked like environmental office issues caused her respiratory issues. Lewis, due to the physical effects she suffered at USDA, has not been able to work since 2005.

In speaking up, Lewis did not enjoy the public notoriety that some whistleblowers found, like Colleen Rowley of the same period, which can provide some safety from retaliation.

EEO, OSC and MSPB did not provide any protection to Lewis twenty years ago, and yet the courage of Legacy Whistleblowers like Lewis, paved the way for progress in whistleblower protection today. We owe them a debt of gratitude.

Read more Whistleblower of the Week profiles on WNN.