Wednesday’s Congressional hearing on whistleblower protections for federal employees went a little off track at times.

Whistleblower advocates, including David Colapinto, general counsel for National Whistleblower Center, testified about the need for greater protections. Two inspectors general — including Michael Horowitz of the Department of Justice — talked about how the process works.

But, at moments, observers could be forgiven for thinking they had walked into the wrong hearing. Republican Rep. Jim Jordan of Ohio, who is not on the House Committee on Oversight and Reform, was invited to sit in on the hearing. He spent most of his time questioning Horowitz about a completely different topic — inaccuracies Horowitz identified in the FBI’s application for a wiretap of a Trump aide during the 2016 campaign. 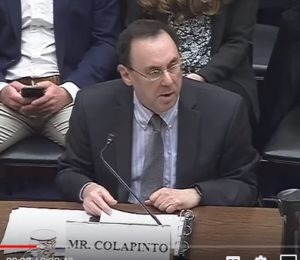 Even when the questioning stayed on topic, the cracks in traditionally bipartisan support for whistleblowers were showing. Democrats asked how they could improve protections. Some Republicans challenged why whistleblowers need to be anonymous and accused the Democrats of “weaponizing” the whistleblowing process. The debate frequently returned to the Ukraine whistleblower.

“For decades, Congress has worked on a bipartisan fashion to protect these whistleblowers,” said Gerald Connolly, the Virginia Democrat who chairs the Government Operations Subcommittee.

The hearing was designed to “address some of the challenges to our current protections that have been brought to life by our recent circumstances,” he said.

Both Colapinto and Elizabeth Hempowicz of the Project on Government Oversight (POGO) outlined several ways whistleblower protections need to be strengthened. The Merit Systems Protection Board (MSPB), which reviews complaints about retaliation against federal employee whistleblowers, has been without any members for months. Those employees need to be allowed take their cases to federal court, they both said.

“Federal whistleblowers face such enormous risks for reporting misconduct –waste, fraud, abuse, and dangers to the public health and safety — it’s a wonder that anyone does it at all,” Colapinto said. “But they do it at the risk of being called a rat, snitch, traitor, spy or worse.”

Whistleblowers need a safe way to report problems, “strong remedies” to address retaliation and a workforce culture that rewards them for coming forward, he said.

While Congress has guaranteed whistleblower confidentiality for decades, there “exists some confusion about how it works,” Colapinto said.

Congress needs to clarify the rules on confidentiality and provide employees with the same remedies available to whistleblowers in the private sector. He cited a 2014 Court of Appeals ruling that found a private employer’s breach of a whistleblower’s anonymity was a violation of anti-retaliation statutes. Hempowicz of POGO said “the system is failing” whistleblowers, citing the 2,500 case backlog at the MSPB. Congress should allow federal employees to “bypass the cumbersome process now in place” and seek redress in the courts.

She also spoke to the importance of anonymity.

“It is an open question as to whether outing a whistleblower is a form of retaliation and that should be clarified,” she said.

Hempowicz noted that Congress has made clear that a whistleblower’s motives could not be used as a reason to deny them legal protection for making a disclosure.

“That’s because motive does not determine whether a whistleblower’s disclosure is legitimate,” she said.

Some members of Congress have called for the unmasking of the Ukraine whistleblower, who they say may be biased against the president.

Rep. Jordan challenged Hempowicz on that point and asked whether the motive of whistleblower ever matters.

“It certainly doesn’t matter more than the facts, and I believe most of the facts have been corroborated, ” she said.

“Whistleblowers might come in different packages, designs, sizes and characters,” he said. “Not all of them are appealing That doesn’t mean their testimony is invalid.”

Below find links to witness testimony. A video of the hearing can be found on YouTube.