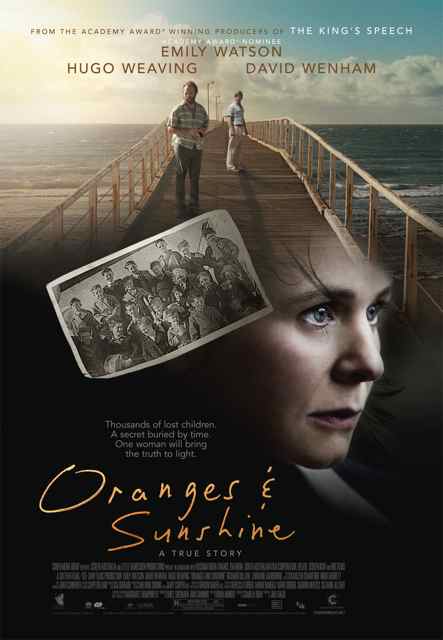 Oranges and Sunshine is a new feature film scheduled for limited release this Friday, October 21, 2011. It is based on the book Empty Cradles by Margaret Humphreys (portrayed by Emily Watson), a social worker in Nottingham, England. Earlier in her career, it was her job to remove babies from loving parents. By 1986, she was leading a group therapy for adults coping with issues arising from their adoptions. Some wanted to find their parents or siblings. One discovered a brother living in Australia. Then another young woman contacted her claiming that she had been taken from her parents in England and transported to Australia where she grew up.

Connecting these two cases, Humphreys begins research that uncovers a decades-long British practice of exporting dependent children. In the 1950’s and 1960’s, upwards of 130,000 children were deported under the program, about 7,000 to Australia. Humphreys used her personal vacation to travel to Australia with that one woman who so treasured meeting her brother. While there, Humphreys continues her research into the child deportations.

Were this a typical whistleblower story, Humphreys would have received a hostile reaction from her superiors when she started raising concerns about a massive fraud and conspiracy by government officials. Instead, when Humphreys explains her concerns to her supervisor, the supervisor is upset that Humphreys had to use her personal vacation time for her investigation in Australia. The supervisor arranges to assign Humphreys to investigate her own concerns, full time, and starts raising the money to cover her salary and expenses for two years. This is a whistleblower fantasy. Our hero also has a supportive husband, and children who share only a few words about missing their busy mother.

Not everyone is so happy that Humphreys is shedding light on the decades-long abuse of children and families. The perpetrators sought to cover up their crimes by telling parents that their children were in good English homes. They told children that their parents had died. “Oranges and Sunshine” is a reference to the promise made to children about what they would find in Australia. Once the children reached Australia, some were forced into labor. Some suffered sexual abuse. As Humphreys builds her case, she faces death threats, harassment, and physical assault. We are spared any graphic portrayals of child slavery, sexual abuse and beatings. Although Humphreys’ experience with violence is brief, the effects are persistent.

Oranges and Sunshine is magnificent in its portrayal of the lasting emotional effects of broken relationships and physical trauma. Injuries of childhood echo into all stages of adulthood. We relive the heartbreak of what was lost as we learn about the opportunities that were missed. We wonder about the effect on Humphreys’ own children as their mother is consumed by her research and advocacy. This element is well known to whistleblowers who experience the loss of their career, and too often, the loss of their marriages. These effects also resonate throughout one’s life.

Oranges and Sunshine is paced slowly, and the dialog is usually presented with English stoicism. Perhaps the director felt this would emphasize the emotional moments. More often, it left me feeling anxious for the story to progress. I could not always tell which scenes were set in England and which in Australia. A few kangaroos or koalas would have helped. The advance screener generously provided by the promoters did not have subtitles. I looked for them when I had trouble hearing some words spoken by the actors. I don’t know if it was because my hearing is declining, the accents were too thick, or the sound quality was less than crisp. However, I am not rushing to make an audiologist appointment.

As to the main injustice, I suggest we do not have to look so far into the past, or so far away to find families who suffer because people in authority think they are justified in removing children from their natural parents. Perhaps as far back as this morning, and as far away as the nearest juvenile court will be enough. Here in Washington, the inadequate treatment of dependent children remains a public scandal. In Appalachian Ohio, excessive court intrusion into families motivated me to undertake appeals and political action.

Oranges and Sunshine tells an important story, and tells it with depth and heartache. The film concludes with the texts of the official apologies of the Australian and British prime ministers, issued in anticipation of this film. Perhaps this review will help you decide if you should look for this film in a theater this weekend or wait for a DVD with subtitles.

Senate Committee marks up and approves a weak WPEA

Senate Committee marks up and approves a weak WPEA