Turns out hearsay can be pretty reliable.

The validity of secondhand information about President Trump’s dealings with Ukraine reemerged as an issue at Wednesday’s impeachment hearings. The president’s supporters initially dismissed the whistleblowers’ revelations as unreliable “hearsay.” They are now making the same claim about the State Department diplomats who were first to testify.

This as virtually everything the whistleblower reported has been confirmed by those in the loop or present at the events in question.

That result would line up with the findings of an analysis of two million whistleblower complaints filed at more than 1,000 private companies. Kyle Welch, a business professor at George Washington University, had just published a study in September using 13-years of information from a firm that makes and runs corporate compliance software. His research, with Stephen Stubben of the University of Utah, is producing much needed data about the nature of whistleblower complaints.

So, when hearsay became an issue in the impeachment investigation, he decided to run some numbers on it.

The surprise: Secondhand “reports are 47.7% more likely than firsthand reports to be substantiated by management, which suggests that management views many secondhand reports as credible.“

Welch also found that a higher volume of whistleblower complaints at a company correlates with smaller fines and fewer lawsuits. That finding applied to both firsthand and secondhand complaints.

“These findings are consistent with secondhand reports providing valuable information that allows management to identify and address issues before they become more costly to the firm,” he wrote in a study published in SSRN, the online social science journal.

In an interview last week, Welch said he thinks secondhand reports benefit from a self-filtering process that reduces the number of frivolous reports. Or, a third party may simply have a clearer view.

“Maybe certain things need to be reported secondhand because the further you get away from the problem, the better,” he said.

The study also notes that those with firsthand knowledge of problems may be reluctant to come forward for fear of retaliation. So, secondhand sources are important.

Individuals who participated in a questionable activity may fear being penalized for their involvement in the activity, and individuals who were victims or observed a questionable activity may be unwilling to speak out of fear of retaliation …This reluctance to come forward is likely to increase with the severity of the activity, because the potential costs to reporting are higher. If individuals with firsthand knowledge of a major concern don’t report it, then secondhand reports could be the only source by which management can discover the issue.

Lawyers advise whistleblowers to approach internal company whistleblower programs with care, The program’s aim to protect the company, creating a built-in conflict of interest. Welch suggests that whistleblowers with information give the company a chance to respond.

“The experience we see from compliance officers: When they see a problem and they try to get ahead of it,” he said.

Welch thinks one reason the organizations with high reports have fewer problems is that are able to deal with issues before the whistleblower goes to a government agency or lawyer. At the same time, he suggests that whistleblowers many not get the results they want, they should report to an outside agency.

“Even though the information provided by a reporter with secondhand information may not be sufficient to make definitive conclusions about the reported activity, it can be a starting point for an investigation and subsequent response that could not have happened otherwise.” 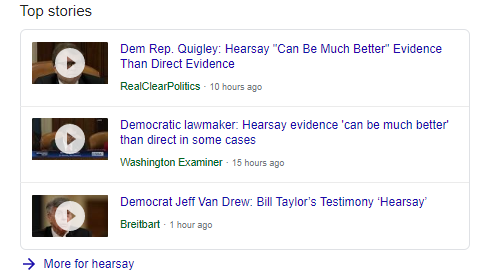 Politico: Their story describes the hearsay argument as the “key pillar of the GOP defense strategy: undermine the witnesses and paint their testimony as nothing more than hearsay and assumptions. When it comes to defending Trump on substance, Republicans feel like that is their best — and perhaps only — card to play.

Jesse Watters of Fox: “This was a hearsay hearing…These guys have never met Donald Trump, they weren’t on the call and they have nothing to do with the aid package.

Daily Wire: Conservatives jump all over Illinois Democrat Mike Quigley’s comment: “I think the American public needs to be reminded that countless people have been convicted on hearsay because the courts have routinely allowed and created, needed exceptions to hearsay…Hearsay can be much better evidence than direct … and it’s certainly valid in this instance.”Quigley had this to say on CNN.

Healthcare whistleblowers have your back, and your knees