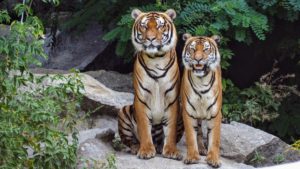 Today, July 29th, marks Global Tiger Day. It is a day to celebrate this unique apex predator, but also to remember that tigers around the globe are under threat. The IUCN Red List includes several subspecies of tiger as endangered or vulnerable, and tiger numbers have declined from an estimated 100,000 in 1990 to under 4,000 today.

The three primary causes of the decline in wild tiger populations are poaching, trafficking, and habitat loss. Tiger products, which are falsely considered by some to have medicinal benefits, and are also seen as a status symbol, are in high demand on the black market. This demand continues to drive poaching and trafficking. At the same time, tiger habitats are being destroyed due to forest clearing of forests and fragmentation of habitats from human development.

The decimation of tiger populations impacts the ecosystems they inhabit. As apex predators, they help regulate the population sizes of other species. The declining numbers are throwing these ecosystems out of balance.

How whistleblowing can help save wild tigers

Supporting whistleblowers can serve as an effective tactic in fighting illegal wildlife trafficking, poaching, and deforestation.

Whistleblower provisions in the Lacey Act and the Endangered Species Act, as well as others, incentivize whistleblowers to come forward with information, such as tips about wildlife trafficking, by providing monetary rewards to the whistleblower.

Moreover, other laws, such as the False Claims Act, can help combat tiger trafficking, by addressing the habitat destruction which endangers them. For example, wild tigers habitats are often destroyed due to large-scale illegal logging. In 2016, Lumber Liquidators was sentenced for illegal importation of hardwood, and fined more than $13 million. The U.S. government relied on a whistleblower to inform them of these destructive practices, which threatened two rare subspecies of tigers in Russia. Today, the company is required to maintain a whistleblower hotline, acknowledging the importance of insider information to catch fraud and illegal activity.

Whistleblower reward laws are a crucial tool for halting illegal wildlife destruction and trafficking, and can be especially important to protecting tigers. Incentivizing whistleblowers to come forward relies on systems that make it easy to confidentially and safely report these crimes; the Global Wildlife Whistleblower Program, a Grand Prize winner of the Crime Tech Challenge sponsored by USAID, helps raise awareness of these laws and provides an avenue for reporting.

What you can do to help today

The Wildlife Conservation and Anti-Trafficking Act of 2018 (H.R. 5697) is a bipartisan bill that will radically increase wildlife crime enforcement and activate wildlife whistleblowers around the globe. Support this effort by writing to your Representatives, urging them to vote in favor of landmark anti-wildlife trafficking legislation.

Raising awareness about the plight of tigers is critical. Purchasing the Save Vanishing Species Tiger stamp provides funding for programs designed to protect tigers every day. The actions of U.S. consumers drive demand for products around the globe. By buying with care and supporting the #BuyInformed campaign of the U.S. Wildlife Trafficking Alliance, informed consumers can change the reality on the ground for tigers.